The Controversial “In God We Trust” 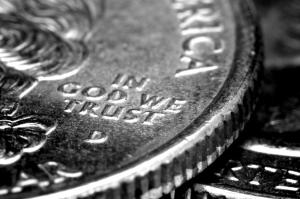 I actually didn’t realize that this motto, featured on our money, was controversial until yesterday when it came up in conversation with some loved ones; some who are and some who are not religious, spiritual, or believers in a higher power. As a believer, I just thought that non-believers would simply dismiss it; it doesn’t apply to them. I learned they could feel unpatriotic and even could develop issues with money (since the motto is on our currency) because of this “national” statement.

Wait a minute, what about that whole “separation of church and state” stuff? And how did our money get involved?

Hmmm…maybe this explains why so many people have so many problems with money; it represents so much more than just paper or coin we exchange for goods and services.

I learned that, while it is now apparently our national motto, it wasn’t always; E Pluribus Unum (“out of many, one”…hence the whole meaning of being “united”) was. This idea of being united, agreeable, being on the same path is wonderful because it lessons tension and argument. We are and act as ONE. Those who are monotheistic believe that there is only one God. Perhaps this explains why — somewhere along the line — our country adopted this motto; the desire to be united, as one, with One. But why the focus on God in our lives as citizens? As a person of faith, this doesn’t necessarily bother me except — and I suspect more of this is going on — when people use their faith as a device to demonstrate their integrity.

I heard an excellent interview on NPR a couple of weeks ago. It was with a married couple who belonged to the Mormon faith. They were people of color as well. They both were registered as “independent” but the wife considers herself to be a democrat while the husband considers himself a conservative. (This sounds vaguely familiar.) They discussed how they selected the candidate who would receive their respective votes (they admitted that they often cancelled each other out)(and don’t assume you know how they have voted or will vote). The key ingredient was integrity. In and of itself, integrity can be found both in the faithful and in the atheist. I think perhaps people believe (or want to believe) that someone with a faith system will be more ethical and have a better sense of judgment. But that assumption doesn’t always bear out. And, there are certainly many people who consider themselves believers who cannot agree on anything.

And we wonder why voter turnout has plummeted.

Many people believe money means power and, in many cases, it does. This becomes a problem just like in any power struggle; someone who has the money/power seeks to push his/her/their agenda(s) on those who don’t. Where is the integrity in that? I wonder how many people who work on Wall Street consider themselves believers and I wonder how many Occupy Wall Street protestors do.

If we believe in a higher power, we can trust it to guide and protect us. I suspect many prayers are said for financial help, probably now more than in a long time. That’s a good sign for the faithful; that they are returning to the source they believe can and will help them, knowing that their own powers are limited.

But for those who do not believe in a higher power, do they feel powerless? Do they long to increase their power (and if so, how)? Do they grumble that others seem to have the power? I didn’t resolve these issues last night but, if it isn’t blatantly obvious, am open to hearing your thoughts.

I also host a class “Faith & Finances” where we discuss issues such as these. See my facebook page for more details.
http://www.facebook.com/LauberFinancialPlanning

I help people who are overwhelmed take control & make good financial decisions with confidence and experience peace and abundance. Are you ready to say goodbye to working hard but not having anything to show for it? Go to www.lauberfinancialplanning.com "Let's Talk" tab to schedule your complimentary initial consultation and take the first step on the path to financial empowerment.
View all posts by Amy Jo Lauber →
This entry was posted in Personal Finance with a twist. Bookmark the permalink.